In this post we’ll learn on the ideas behind Fixel EdgeHancer and what makes it different than other sharpening concepts.

In this post we’ll learn on the ideas behind Fixel EdgeHancer and what makes it different than other sharpening concepts.

But, let’s do our own (Short) walk in the park.
The basic concept of sharpening is - If you know how to blur, just do the inverse of that.

Yep, it is just like that (One day we’ll write on how to create your own Unsharp Mask Filter in Photoshop using Gaussian Blur only).

Well, as talked above, sharpening methods response to changes.
Changes are what we call edges in images.
So sharpening is basically an indirect method to emphasize edges.

Yet, could we do something which directly interacts with edges? Yes we can!

Assuming, given an image, we could access a map of the image edges, what would we do?
Well, we could do many different things to emphasize those edges.
In practice any mathematical operation that will differentiate the edges form their surrounding would work - Addition, Multiplication, etc…

This is what so special about EdgeHancer, the way it detects edges to create the map (Mask) of edges. We utilized very innovative way to do so we have never seen anywhere else.
Its magic by its relative simplicity (Though using mathematical operations not available in Photoshop without a Plug In). The method has 2 properties which are important for real life image processing (Done by Photographers):

Let’s have a look how the mask generated by Fixel EdgeHancer algorithms looks like. 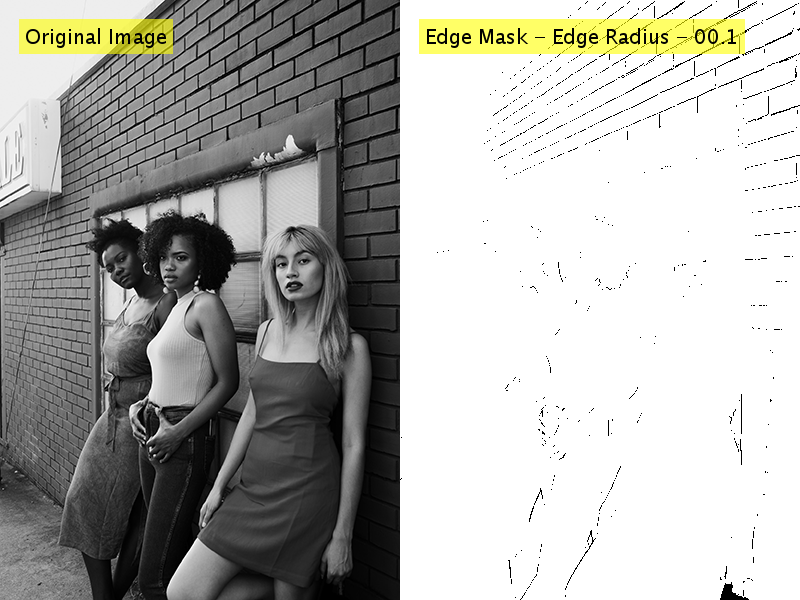 The radius parameter controls the width of the effect on edge areas.
Which is exactly what one would expect to achieve with such parameter.

Targeting edges directly is the special sauce of EdgeHancer which makes its end result different than traditional sharpening.
This approach works beautifully on textures and images with pronounced edges.
You really should try it by yourself.